Football stadium disasters and their causes

Football or soccer games are, by far, the most practiced and watched sporting events in the world. Sports fans of all ages, social backgrounds, or genders weekly go out to support their favourite teams in their place of worship: the stadium.

No wonder it is often said that “football is a party”. And that expression is certainly true. Until it isn’t. Numerous disasters have occurred in the past. Sometimes due to poor building design, often due to failing crowd management by security personnel. Even though fires may not be the highest risk factor, it remains a challenge to execute a safe evacuation of soccer stadiums – in whatever type of incident.

A regrettable list of football stadium disasters and their causes

In 1995 a burning cigarette underneath the wooden stands led to 56 dead and 250 injured in Bradford Valley Parade Stadium in the UK.

In 1985, 39 people died and 600 more were injured during the Heysel Stadium disaster in Brussels, Belgium. The stadium was in no fit state to host the Eurocup finals: a stampede occurred when rivaling spectators started fighting, and couldn’t be separated because of the infrastructure.

Hillsborough Sheffield, UK, saw the death of 96 people and the injuries of 766 more when the police failed to control the crowd in 1989. The combination of overcrowding, poor stadium facilities, and no valid safety certificates, led to safety improvements in all English stadiums. Security personnel admitted too many people, which led to overcrowding and unsuccessful crowd control during the Ellis Park stadium disaster in Johannesburg, South Africa in 2001. 43 people died.

In Lima, Peru, police fired tear gas into the crowd during a match in 1964. It led to a panic and a rush to the exit. The so-called Estadio Nacional disaster cost 328 people their lives and left 500 others injured.

A risk-based approach to designing new and evaluating existing stadiums

It should be our goal to never add another disaster to the list above. But how can we make football stadiums safer environments?

In a risk-based approach, designers adopt a holistic view on safety – as opposed to merely following building codes: 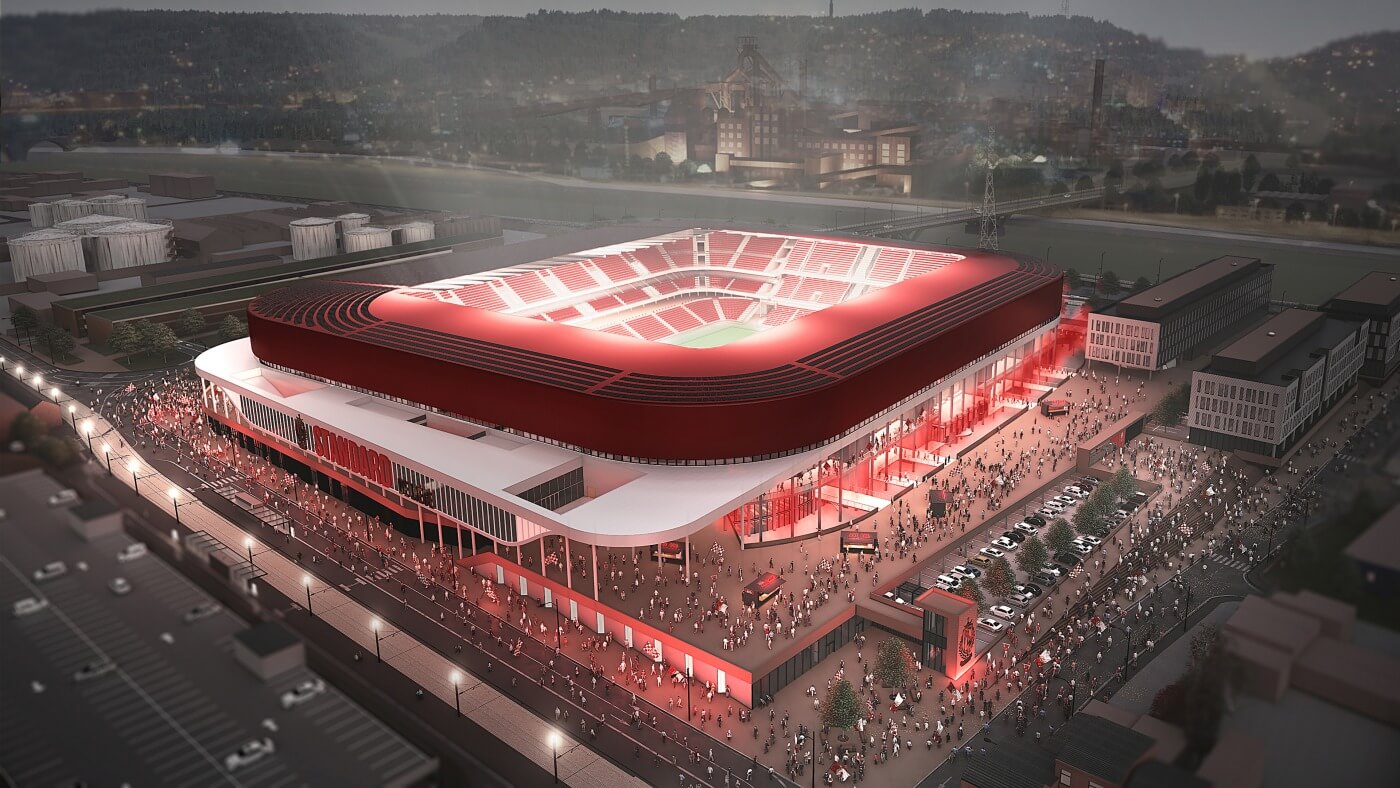 Since stadiums hold a vast amount of people, evacuation simulations can help visualise the flow of people during an evacuation. This information can be used to adjust or alter the evacuation routes of the stadium accordingly.

“A simulation helps visualise the flow of people during evacuations.”

After evacuation simulation, the design team has useful information at their disposal:

Risk analysis: exposure from outside the stadium

While working on the (fire) safety of a new grandstand such as Standard Liège's in Sclessin, designed by Assar Architects, one example comes to mind. The possible exposure that can come from outside the stadium, is a safety aspect that lacks coverage within the legislation.

“Safety measures for exposure to outside calamities, lacks coverage in the legislation. Thorough risk analysis does cover this.”

Think of heat impact from outside fires, or overpressure of blast waves after an explosion in the direct vicinity of the stadium. The consequences of unpredictable circumstances such as these should be taken into account. Luckily they are, during a thorough risk analysis. By calculating the heat- or overpressure contours of fires or explosions close to the stadium, we determine the appropriate safety measures, like a firewall to shield the stadium from the heat of a fire or the blast wave from an explosion.

We are the champions – of fire safety

The European championship is off to a great start, with Belgium on its due course to victory – we hope. But more importantly, let’s trust that a risk-based approach was the basis on which safety measures in all stadiums were taken. So the matches will not only be fun, but also safe.